Can’t really explain what happened to me here. There is obviously a new taste profile that the judges are liking better than what they liked last year. It’s going to be my job now to figure out just what that is, or give them something even better.

But the big story for the weekend was recent Swamp Boys Q School graduates Unknown BBQ. Jason, Lee, and Clark all took my class just less than a month ago. This was their first FBA contest since the class, and they had never won a first place in any category, or a Grand Championship. Well, they won a first in chicken, a first in ribs, and a first in brisket, along with Grand Champion. I’d say the class paid off for them! Congratulations guys!

The timing couldn’t have been better. Right after I finished in Detroit with the Steve Harvey Morning Show (see below), I hopped a plane to Chicago, rented a car, and drove into the middle of corn country to a small town called Shannon, IL. This was where they were holding the Butt to Butt XII®, which is an invite only contest for the top 10 pork cookers in the country. I was invited because of my win in Pork Shoulder at the Jack Daniel’s World Championship Invitational BBQ Contest. Then immediately following that there was the Illinois State BBQ Championship which I would also compete in.

The Butt to Butt was a very tough contest. I wasn’t real confident in the product I turned in, and the judges didn’t like it either. I came in 6th. Out of 6. It just wasn’t my day for pork. That said, I am very proud to have been 1 of only 10 invited. To cook in this was a check off on my bbq bucket list, so that’s good. 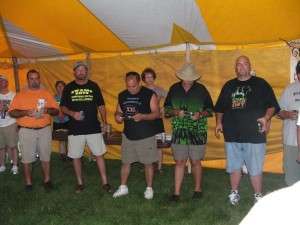 The Illinois State Championship was a whole new day, so I shook off the disappointment from earlier and got down to business. I had 3 guys come join me for a private class for the weekend: Ken, Pat, and Tim. We all got along great, I think they picked up some tips, and they were a big help. Ken and Pat even brought along their Stump’s Smokers for me to use. 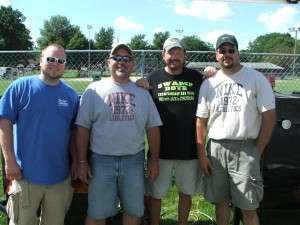 I borrowed everything I needed camp-wise from Scottie (CancerSucksChicago.com), Todd (Plowboys), and Ron (Captain Ron’s Brew-n-Que). I can’t say enough great things about these guys and their sincere desire to help me out. They made it possible for me to fly in basically empty handed and cook a full blown contest. And we didn’t just cook it, we did pretty darn good! I got a 4th in Chicken, a 10th in Ribs, a 16th in Pork, and a 19th in Brisket to come in 6th Overall out of 61 pro teams in the IL State Championship, all on borrowed equipment!

Great friends and college buddies (Pat, Mary and Tessa) came out to visit from WI, and brought their friends Madeline and Philip. Mary’s Mother and Father were also able to come out, so it was a party! It was a fantastic weekend in “The Field of Dreams” and I am so glad I got to experience it with old and new friends.

The day after Kingsford asked me to help promote them at Daytona, they asked if I would fly to Detroit and represent them at a live remote for the Steve Harvey Morning Show. I thought it sounded like fun so I agreed. 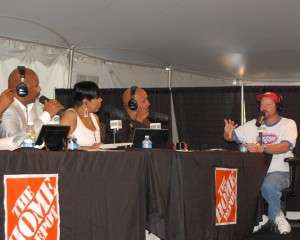 I arrived in Detroit Wednesday evening, then made my way to the Home Depot Thursday morning at 5:00am to prepare for the interview. There was a live studio audience of around 700. I was told I’d have 6-8 minutes of air time with Steve, but by the time all was said and done my segment was closer to the 20 minute mark. We had a lot of fun talking about grilling, different charcoals, lighting methods, etc. I even got in a pretty good joke! 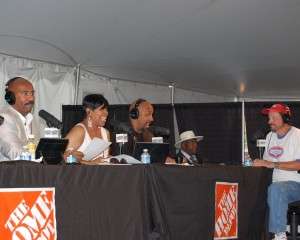 I got some laughs!

His sidekick “Nephew Tommy” was asking me lots of questions during the break as well. I think these guys take their grilling pretty seriously and were taking advantage of this time to get lots of great tips and tricks. And hopefully some of the 8 million listeners of his nationally syndicated morning show will take note as well and go buy some Kingsford! 🙂

So the good folks at Kingsford asked me if I would represent them at this Florida BBQ Cookoff; I had to take the opportunity. I arrived at Daytona International Speedway Thursday around 7pm after sitting in an I-4 traffic jam for over an hour. I found out on the drive over that I would be without power, which was bad. I had to start cooking for Friday product demos Thursday night. Fortunately my good friend Dana was able to get in touch with our friend Rich who lives in the area, and had a generator that I was able to borrow. Problem solved, thank you so much guys.

They have me set up right next to a 40′ inflatable Kingsford grill, which acts as an arch to welcome people into the Kingsford compound. I’ve got the #47 Kingsford car parked behind me, the Kingsford main stage is in front of the car. This will be my “office” for the next 2 days and I’m loving it. 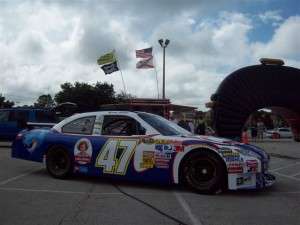 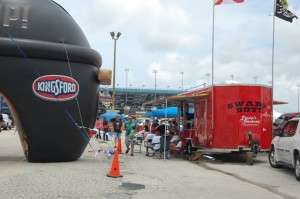 The Swamp Babes and Woody arrived Friday morning and we all got into our Kingsford gear. The crew was nicknamed the “Briquetes” which they liked. 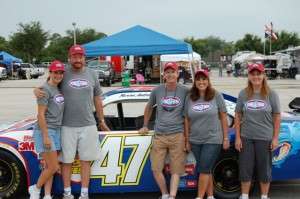 We had fun with the public on Friday, talking about how we cooked the pork for the sliders we were serving. I reloaded the pits Friday night with plans of serving most all day long on Saturday. We were swamped all day serving food. The highlight for me was having the #47 driver Marcos Ambrose on stage with me, helping out with my pork demo. We had a lot of laughs and really enjoyed the time. Afterwards he gave autographs, the Briquetes served 1,000 samples, and a big time was had by all. 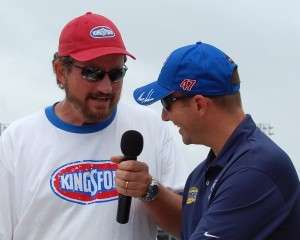 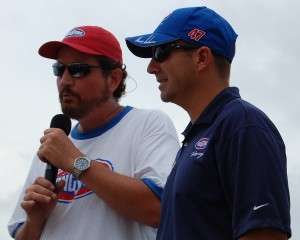 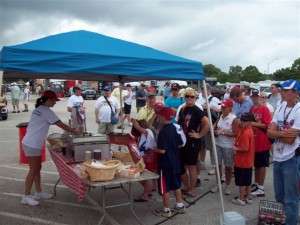 Around 7pm we made our way to the race, the Coke Zero 400. There was a  rain delay, but it went by quickly. Unfortunately Marcos got caught up in the big wreck that took out nearly half of the field. We still had a blast and after the race everyone was ready for some much needed sleep.

The whole event was a fantastic experience for us, and one we will not soon forget. Everyone with Kingsford was great to work with and we look forward to working with them in the future.