If you didn’t see me online looking for donations for our local kidsPack charity several weeks ago I don’t know how I missed you. I’m sure I was borderline (if not downright) annoying day after day asking for donations of Chef Boyardee microwavable cans and money – to buy more cans. But it was all for a great cause, and also one that is important to me.

Swamp Boys is part of Big Poppa Smokers “Elite Team”. To see what that means you can read my entry here. Our chosen charity that we compete for is kidsPack, so when there is a local FBA BBQ contest that is hosted by kidsPack, and is a fundraiser for kidsPack, you’d better believe we are all in. 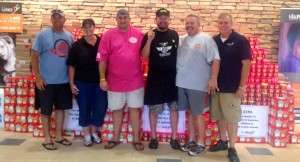 Along with the regular bbq contest there is also a “People’s Choice” contest, and the team that can bring the the most cans of Chef Boyardee to be distributed to the kids in need, wins. We won it the first year. We were defending this year. There were rumors of 2,500 cans needed to win this year. After everything was tallied Oct. 4, the Swamp Boys Nation had amassed a whopping 4,000 cans! Unfortunately that was only good enough for 2nd place, BPCK took 1st with 4,500 cans. In total there were over 13,000 cans brought in that weekend which was an amazing amount. Enough to feed all of the children in our area for a month’s worth of weekends. While we didn’t collect the most cans, I know we were all pushing each other to collect more and more. The competition was great.

Speaking of competition, the BBQ part went really well. I managed 3 top ten calls (2nd, 7th, 2nd) out of 39 pro teams which was enough to eek out a Grand Championship! Super happy about that! And thanks to my great sponsors who help make this all possible.