I’ve been blessed in that I have been able to secure product sponsorships from companies that I use and believe in. Over the next couple of months I am going to highlight each one and share why I chose them and what makes them great. This first installment will be on Grizzly Coolers; they have been a Swamp Boys sponsor since early 2013.

I rely heavily on my coolers. At any given pro Barbecue contest I will have over $500 in top quality meats, sauces, injections, drinks, and food that I need for the weekend. My coolers have to hold ice and keep my stuff cold. The longer the better. The less ice I have to buy means more money in 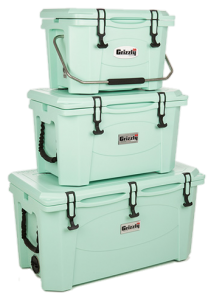 my pocket. In the beginning I used the coolers from the mega-mart stores because they were inexpensive. Of course I learned you get what you pay for in coolers. Driving 12 hours to a contest with the cooler in the back of my truck, and finding the cooler has nothing but water, soggy meat, and a little ice is not a good thing. Having to stop midway to buy and add more ice is also not a good thing. That doesn’t happen with a Grizzly Cooler. My Grizzly 150 Cooler stays in the bed of my truck 24/7, and has a reported ice retention of over 11 days. I personally have experienced ice retention of over a week in my travels, and that is more than good enough for me. It very well may have continued to 11 days but I quit keeping track. In the black, hot bed of my truck in the FL sun, and opening and closing daily. I don’t need any bad surprises when I open the lid, and I don’t get any with my Grizzly Cooler.

Durability is another important factor in my Grizzly Coolers. The mega-mart coolers would last me a season if I was lucky. I used to have a cooler junkyard in the back yard filled with coolers with broken hinges, latches, and cracked bottoms and lids. Not any more. Grizzly Coolers come with a LIFETIME WARRANTY. Not 1 year like the mega-mart coolers. Not 5 years like that company based on a fictional snow creature. Lifetime Warranty.

And the final reason I chose to align myself and Swamp Boys with Grizzly Coolers is they are Made in America. If there are 2 similar products with similar prices, and one is made in the Philippines supporting their economy, and the other is made in America supporting our economy, it’s a no-brainer. Be American, act American, buy American. Buy Grizzly.

I’ve had lot’s of requests for another Q School. I’ve been able to pull it together and the date will be June 27-28, 2015. The location will be the same location as Winter Haven’s Smoke on the Water contest. It’s located lakefront on the beautiful Chain of Lakes, directly behind the Citrus Center Boys Club. The schedule will be as follows:

Sunday 7:30am – Class resumes
3:00 or until all questions are answered – Class ends

Don’t miss this class, last one at this price! Click here print the application >>> BoysClub15APP

You can mail in a check or pay online with a credit card. No PayPal account required. PayPal fees reflected in online payment price. 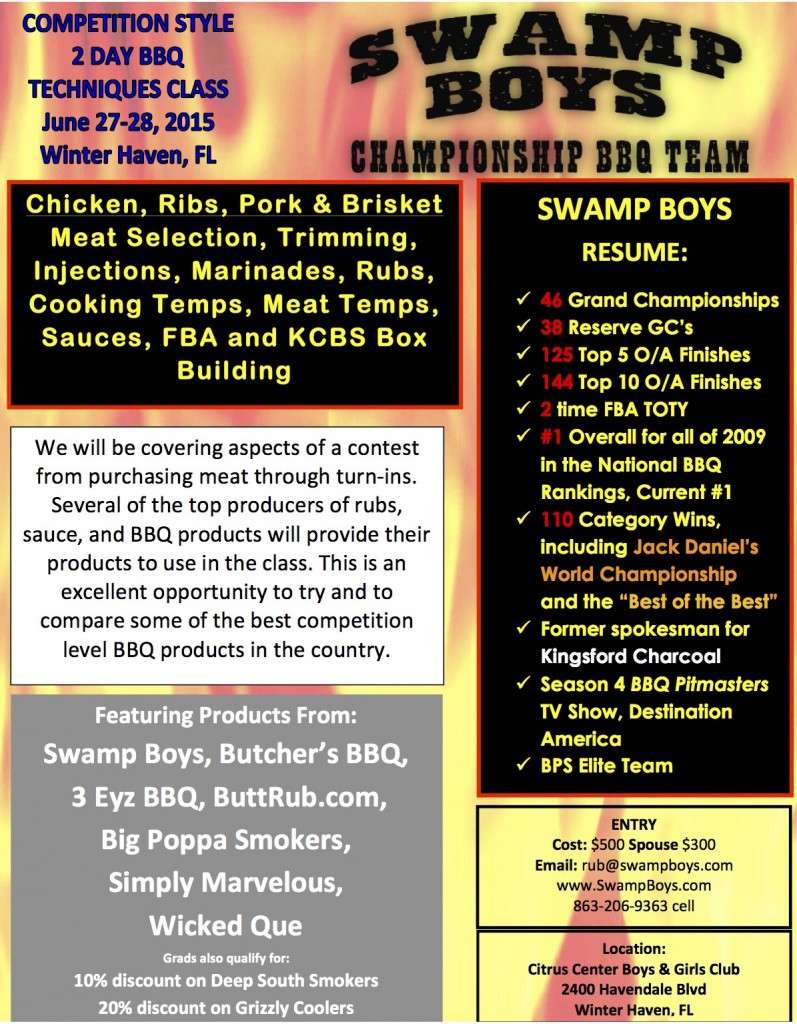 This is class pics of almost all past Q Schools. At least one class is missing but I’m working on it. I have loved teaching at every one of them, and thanks for trusting in me!

Hover the cursor over a picture to see it enlarged, or click on it for an even larger view.

Our teammate Robin who has breast cancer has asked me to share a thank you note with all of you who have helped by buying t-shirts, making donations, and offering prayers:

Thanks so much for buying a shirt! From friends at work, through BBQ and my Swamp Boys Family, to those who just saw us wearing the shirts and took time to ask, or those who I don’t know at all, but maybe just had cancer touch their lives in some way; you have all touched my life now and I can’t thank you enough.

Special thanks to Rob, Amy, and Jenna for everything they have done and continue to do daily. Hugs, smiles and jokes are so important right now too!

Things are going well and I’m in my 2nd round of chemo with surgery to follow near the end of summer and radiation after. With all the prayers and support, I am very optimistic and feel I’ll be fine. Hope to see some of you for our local BBQ competitions in the next year.

Love and Thanks,
Robin

Below is a collection of pictures of friends who have joined in the fight. Hover over a picture or click on it to see a larger view. Thanks so much to all who have helped in any way, you are awesome. God Bless.