The first Swamp Boys Q School for 2018 is scheduled!

March 17-18, 2018 is the date for my Q School to be held in Winter Haven, lakefront on Lake Cannon. Come enjoy the perfect weather and learn what I have learned over the past 14 years of competition barbecue. The only 3-time Florida BBQ Association Team of the Year, and 2017 TOTY.

This techniques class will cover both ‘hot and fast’ and ‘low and slow’ methods. FBA and KCBS covered. You want to be the best bbq’r in your neighborhood? Come see me, I’ll make it happen. You want to improve your competition cooking? Let’s do it.

Print the application below (March_18 QSchool), fill it out and mail it in with your check. Need to pay with a credit card? Use the PayPal link. A PayPal account is not required. The PP fee will be added to your total. Still must mail in the application. 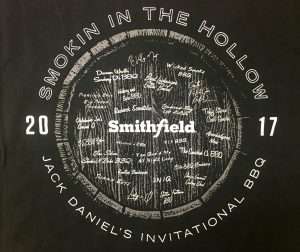 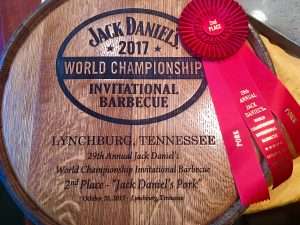 Swamp Boys bbq team had a very blessed year in 2017. The experiences I get to have with friends and family are truly unforgettable. I’m so thankful. I’m especially thankful for earning the Florida BBQ Association Team of the Year ’17. This marks my 3rd time winning it, in two different decades. Here’s my year by the numbers:

Final TOTY Standings. I was in 2nd place up until the final contest.

One of the things that won’t show up in the numbers that I’m really proud of was earning an invitation to every major invitational in the country. The American Royal, Sonny’s, The Jack, and the King of the Smoker. We were able to travel and compete in all but the American Royal.

Regarding KCBS I was able to compete in 5 contests. Out of over 2,200 teams in my division (5 or less contests) Swamp Boys placed 8th overall for the year, and we were the 2nd place rib team (Smithfield ribs baby!). I’m pretty happy with that considering 2 of those contests we were vending, which means I was cooking food for thousands of people, as well as the 6 judges.

Finally a big shout out to my amazing sponsors! Products from each of them are integral to my team, and I’m thankful for their support.

Swamp Boys BBQ Team was blessed for the 2017 season. Because we won 6 State Championships for the season we had 6 “bungs” in The Draw for the 29th annual Jack Daniel’s World Championship Invitational Barbecue, held in Lynchburg TN.

Lynchburg is where the famous whiskey has always been made and bottled. To most all professional barbecuers, “The Jack” is considered one of – if not the – premier contests in the world. So we were stoked when we found out we would be the team representing Florida.

We left straight from teaching on Tuesday and made it up to Marietta GA where we stayed the night. The next morning we got to Lynchburg and dropped the trailer at the house we rented and made our way to Miss Mary Bobo’s for a family style lunch. We shared our table with people from South Africa and Canada who were in town to buy an entire barrel of JD! The food and the company were both excellent, and we all agreed it was the best experience we have had there in our three times going.

After that we set the trailer up in our site, which has been the same each time. We love it there right up front and center so we can interact with the public and giveaway samples of our bbq after turn-ins are over. Great spot.

Thursday we walked over to the Jack Daniel Distillery for the tour. We had Jed as our guide and he did a great job. Just like lunch at Miss Mary Bobo’s, we each thought this was the best tour we’ve had to date. Way 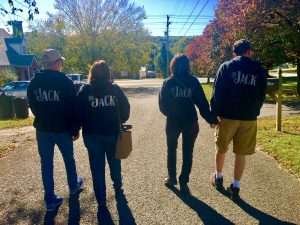 to go Lynchburg! Then we made our way to the Lynchburg Winery and partook in a flight of five of the local wines.

Friday we took part in the Parade of Teams, following the Lynchburg High School marching band through the downtown to the Distillery. From there we loaded up on school busses which took us to the top of BBQ Hill. We were treated to a great Southern supper, live music, and free JD drinks. It was a lot of fun mingling with friends from the other teams. When that was over we went back down the hill to the cook site. The weather was rainy and in the 30’s overnight so most teams stayed warm and dry in their trailers without much socializing. 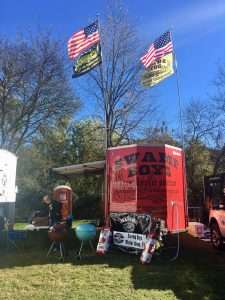 Saturday was of course turn-in day and overall things went very well. Chicken looked and tasted excellent. Ribs were darker than I prefer but the taste and tenderness were right where I wanted them. Pork was near perfect I thought. Brisket slices were money but the burnt ends had slightly too much fat in them. I liked them and was torn on whether to use them or not. I decided to NOT play it safe and added them to the box. In hindsight that was a mistake on my part. The killer brisket from The Butcher Shoppe was amazing straight from the package. I should have gone with only slices, it would have scored much higher. Lesson learned. I highly recommend The Butcher Shoppe for your high quality meat needs, and they ship! Email Kevin Green with your order and fantastic customer service.

As far as the scoring went, I came in 2nd on my tables in Chicken, Ribs, and Brisket. I came in 1st on my Pork table which was good enough for 2nd out of the 95 teams! We actually tied for 1st, but lost the tiebreaker. Regardless it was a very exciting call for us, and it pairs well with the 1st place call in Pork we received there in 2009. You may have heard me mention in the past that I am a devout Smithfield pork user. To make my point, I was unable to find the Smithfield butts I wanted locally, so I had my friends Pat and Mary bring some with them to Lynchburg from Wisconsin. And it paid off. Thanks so much Pat and Mary, and also thanks for the Wisconsin care package! #Smokinwithsmithfield #Showmeyoursmithfield

My other sponsors that I rely on and want to thank are West Coast Offense, Nature’s Own Hardwood Charcoal, Butcher BBQ, BBQ Guru, Grizzly Coolers, Mac’s Meats, and the one-two punch of my Gateway Drum Smokers and my Deep South Smoker. Stop by sometime and I’ll tell you what I like about them.

So once again we had a fantastic time in Lynchburg and are thankful we had the opportunity to go. Lots of friends, laughs, fun, and memories. That’s what it’s all about.

Ready for the Distillery Tour 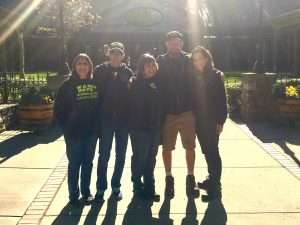 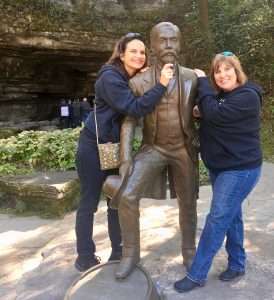 Thank you Phillip and Kathy! 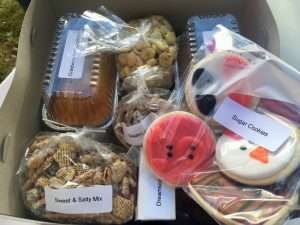 A few of my Webers and Ed 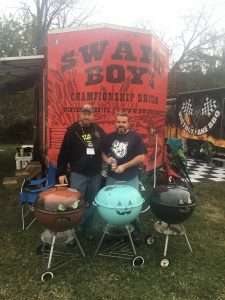 I am giving up a seat for any of my Q Schools in the future. The next class is being held February 18-19 in Winter Haven, FL behind the Boy’s Club. Click the PayPal link to make a donation of $25 for the Winter Haven Citrus Center Boy’s and Girl’s Clubs. Each $25 donation will earn you a chance in a drawing for a free seat in my class which is valued at $500. This will stay open through Feb. 6, or until it hits $500+ for the kids. I will have a live Facebook drawing and notify the winner. I will give a check for 100% of money donated and will cover the PayPal fees. Thanks for helping the kids and good luck!

Thanks to all who participated, we will be giving the Club $775.00!

Swamp Boys BBQ Team was blessed to have another fun, productive, and charitable year in 2015. We were able to compete in 26 contests, in AL, AZ, FL, GA, NC, TN, TX, and The Hague, Netherlands! I travelled over 24,000 miles, all in the name of barbecue! 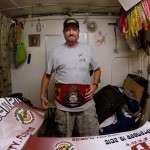 We repeated as the Florida BBQ Association Florida State Champions, and finished 3rd in the FBA Team of the Year race, giving us 10 years of consecutive top 5 finishes.

On the Swamp Boys Q School front I was able to teach 5 classes in FL, IA, AZ and The Hague, NL. I truly enjoy teaching the art and science of BBQ to whoever will listen, wherever they are! 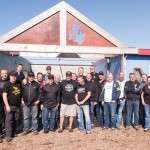 Swamp Boys BBQ Sauce sales also set a record, with 4 of the top 5 KCBS Teams of the Year being customers! We were also able to be accepted into the “Fresh From Florida” campaign, as a truly Florida product. I fully expect 2016 to set more records as the good word spreads.

Through the help of the Swamp Boys Nation (all of you!) we were able to raise almost $7,000 to give directly to 2 dear barbecue friends who each experienced extreme health emergencies in ’15, to help pay their medical bills. 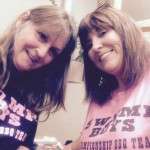 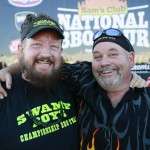 And as an outgoing  member of Big Poppa Smokers Elite Team, I am honored to be able to present our local  kidsPack USA a check for $1,000 from BPS. I regret that this will be my last act as a BPS Elite Team, as the criteria to belong has changed for 2016. However I am extremely thankful for the opportunity I have had to be a part of this charitable group of barbecuers. I hope to be able to continue to support kidsPack through other avenues in 2016. 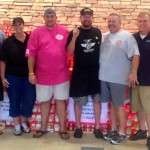 Of course all of this was possible with the help of my sponsors, who have provided me with the best products available: Deep South Smokers, Big Poppa Smokers, Compart Duroc Family Farms, Nature’s Own Hardwood Charcoal, Grizzly Coolers, GrillGrates, Butcher BBQ, BBQ Guru, 3 Eyz BBQ. I fully recommend all of these products with no reservations. Please talk to me if you have questions about any of them. I will be happy to help! And most of all thank you to my family! Without the love and support of my wife and daughters none of this could have happened. I love you guys, forever. 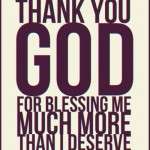